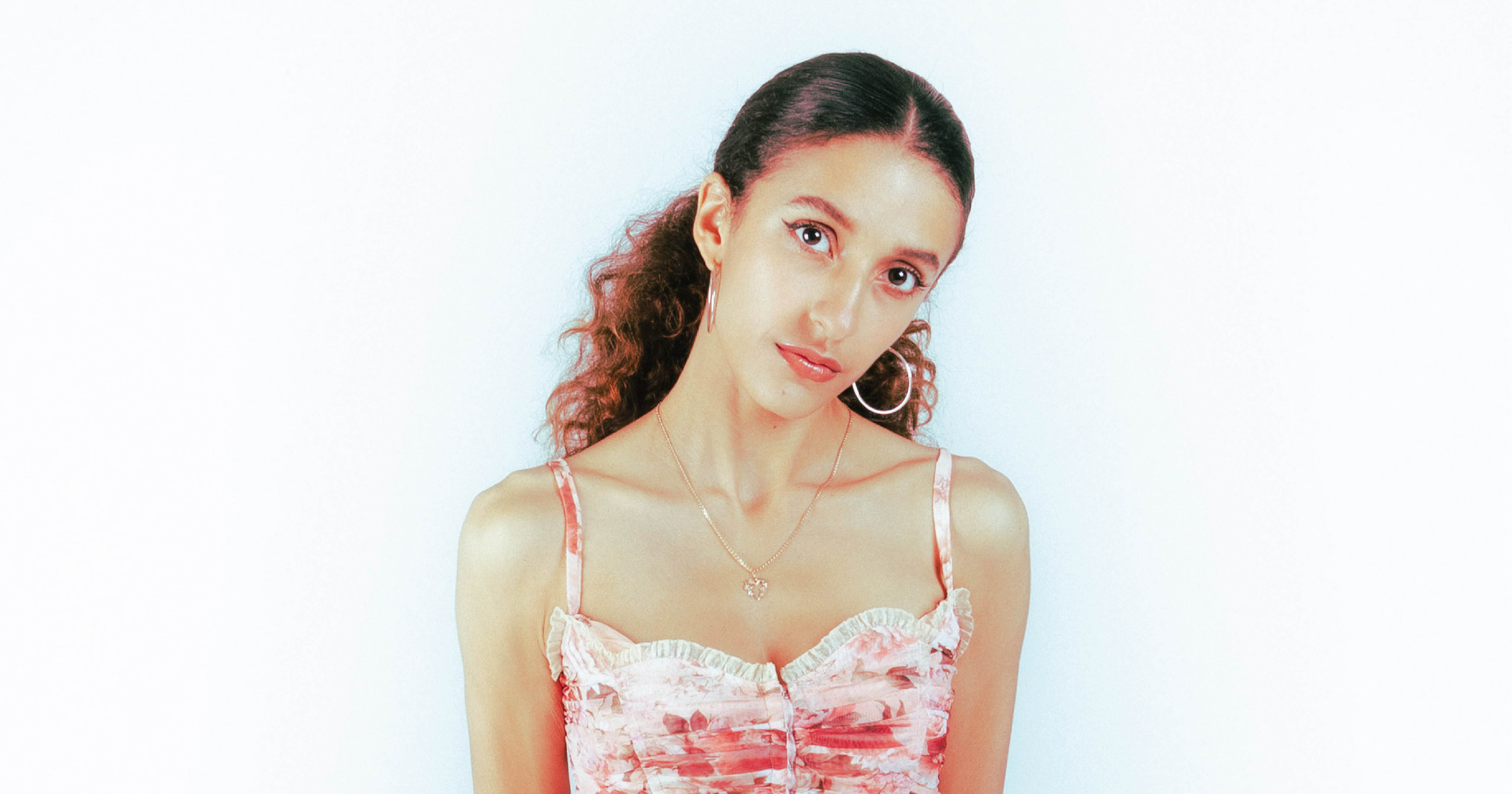 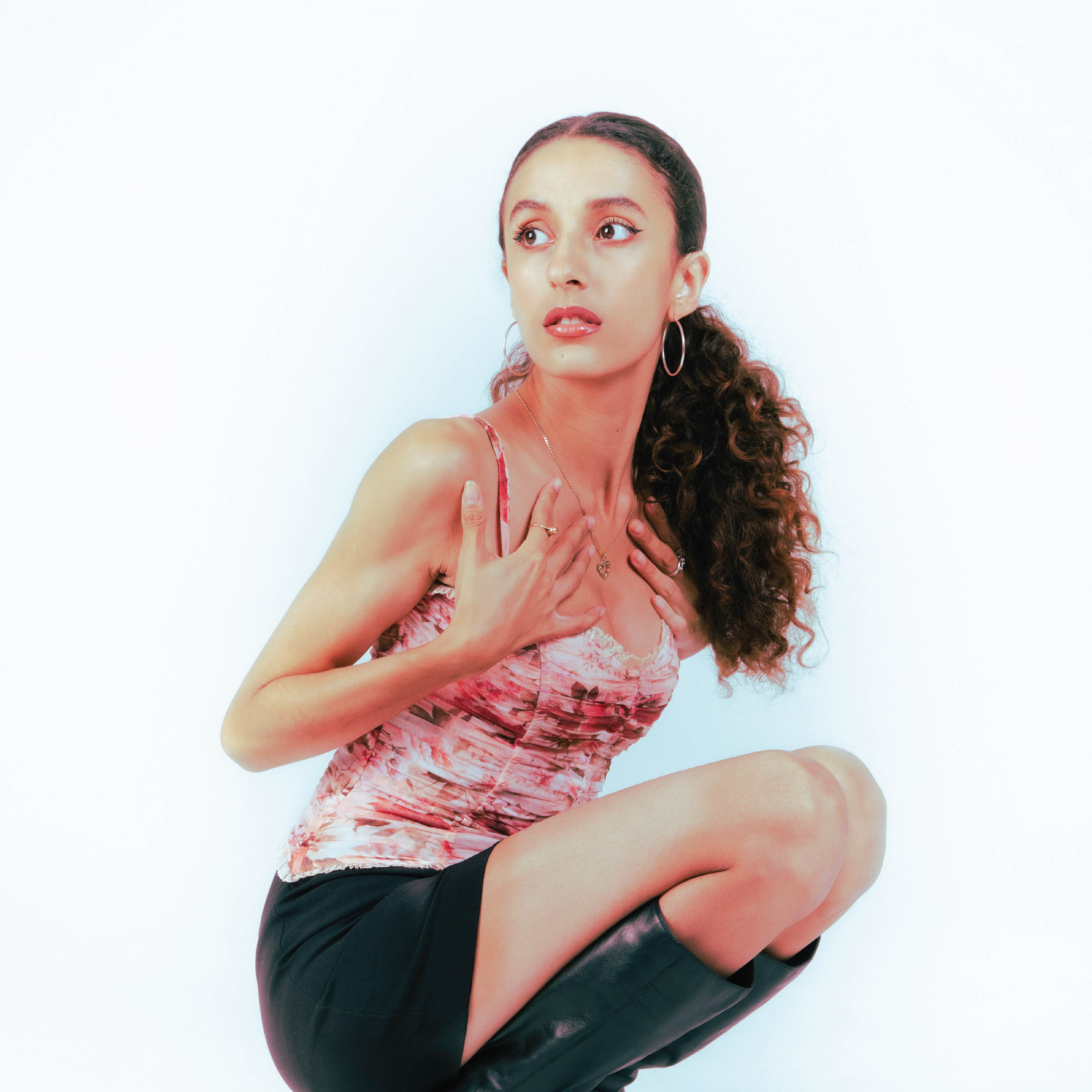 Self-identified ‘Latina bedroom pop princess’ Miranda Del Sol oozes so much confidence in her new single ‘SUPPLY & DEMAND,’ you’d likely be surprised to learn she regularly deals with the throes of anxiety.

Del Sol’s story with anxiety is anything but a bummer, though. In the vulnerability era of the internet, the New York University student is a beacon of inspiration, posting videos on social media about her mental health, her content always honest, always candid. It’s fodder for her slick, bold songwriting, and her openness is part of the draw for her quickly growing fan base on social media (especially TikTok, where she just hit 15,000 followers and posts song snippets, relatable videos about mental health, and speaks to the sometimes overwhelming job of being an independent artist).

That authenticity bleeds into her songwriting, which channels the overlapping rollercoasters of sex, femininity and cultural identity. “I’m practically a figment of your wild imagination, a product of you sayin’ all your daily affirmations” she sings triumphantly on her song ‘SUPPLY & DEMAND’ over chords that sound straight out of a Blood Orange or Kali Uchis joint. Whether it’s bravado, late-night yearning, or something in-between, Del Sol hits on ubiquitous experiences that have gained her playlist and editorial attention despite how early she is in her career (and with just three singles in her catalog).

Hot off of her very first live show (in NYC no less), Del Sol caught up with Quadio over Zoom to chat about what people constantly get wrong about Latin pop stars, the peculiar role that Twilight had in helping one of her singles soar on streaming, and how faking it really can turn into making it.

You had your first-ever live show recently, and you did it here in NYC. How was it?

It actually went so much better than I could have imagined. The crowd was so receptive, even though most of them didn't know who I was because I was an opener. Often, with openers, it feels like the crowd just nods along. But they weren't just nodding, they were moving and singing with me and, yeah, it was good. Still, I was so nervous. I was prepared for the worst, but honestly, I feel like the crowd has now set the bar very high.

You’re such a great example of a self-starter. Do you feel like you know what you’re doing as an independent artist? How do you figure it all out?

Because I'm studying at NYU Clive, I am taking business classes and I'm really lucky that a lot of my homework is directly tied to my career. But it's been a process of trial and error. Thinking back to the beginning, I had an office hours with my teacher where he was like, "Oh, so two weeks before your release you should probably email blogs." And I’d ask a friend, "How did you find playlists?" And she'd be like, "Oh, I thought about themes that made sense with my song and found playlists with those themes and researched on Instagram until I found the person who made the playlist and messaged them." As I was getting my song  ‘Care About Me’ out there, I found a blog that had a ‘submit press release’ button. And I was like, "Press release?"

Was that the first time you’d heard the phrase?

Yeah. So I Googled what a press release was and I was like, "Oh," and then I made a press release. But I didn't get a lot of traction on ‘Care About Me’ for a bit. It came down to experimenting and just trying things out — I played around with a lot of different themes for my music and brand before I landed on Latina bedroom pop princess. That's not what I want to be labeled as for life, but it's definitely been helpful as I keep growing.

You’re growing on TikTok. How does the platform figure into your career as an artist?

In fall 2020, I released my first song, ‘Simping,’ and I thought it made sense to promote it with some TikTok videos. So I posted, and I remember I was with my best friend, Ayleen Valentine, who produced it, and it had 50 views. Then 100 views. And it was moving quickly so she called her boyfriend all excited, and we were like, ‘Oh my God, it’s happening. We’re going viral.’ And then it stopped at 1,000, ha.

But I’ve had things go more viral than that, and the process of posting on TikTok has given me back some control in my career. For a long time, it felt like I was completely not in control, and my career was dependent on waiting for someone to discover me. With TikTok, it’s like, there’s something that I can do every day that actively gets me closer to my dreams. But, funny enough, the Twilight fandom helped me go TikTok viral with my song ‘Care About Me.’

Okay, what? Twilight helped you go viral on TikTok? Please tell me more.

Basically, my For You page was all Twilight, because I grew up on the franchise. So I started making funny Twilight memes, because I have been thinking in terms of Twilight memes my whole life and finally had people to share them with.

When it was time to put out ‘Care About Me,’ I was like, "What can I do differently this time, what did I not do for ‘Simping’ that I can do now?” So I literally asked the Twilight community on TikTok because I saw an alignment between Twilight fans and my music, and I thought people who liked one would probably like the other. I posted snippets of ‘Care About Me’ and made videos directly pitching the song to Twilight fans and using Twilight hashtags, explaining that I was an independent artist and their help could really support my career. And it worked! The fandom was into it, people were commenting, "Oh my God, we have your back, girl. We're going to listen." And from there, I’ve been widening that net — maybe more than just Twilight fans would like my music. I've just started describing myself. Girls with anxiety, Latina girls with anxiety — this is me, and this is the type of person that would probably like my music, so that’s who I’m making content for right now.

How do things like anxiety, insecurity, and identity factor into your songwriting? How did you end up with ‘Supply & Demand,’ which is just a total bad b*tch anthem?

My friend and co-producer Ayleen came to NYC from Berklee College to write with me over last winter break. We were just ready to make a ton of music, get a ton of content, and one of the days we planned for a photo shoot. We got all dressed up, went to do a little photo shoot and it was just… a fail. You know when you try to do a photo shoot with your friend and literally not one picture comes out right? The vision was just... It was so bad. We felt so insecure and down.

We got home from the shoot and were like, "Okay, let's just try to make a song." And I was thinking about how so many women in my life accept less than they deserve. I’m always thinking, "Girl, you could do so much better. You are really giving everything in this relationship. You're doing it all and not really getting much in return." Then I started writing from that perspective — like, what if I was super confident and actually believed this? So the song came out of that headspace, not like a parody, but as I was writing it, I was trying to make it as fantastical as possible. And now I listen back to it and I'm like, "Okay, wait, this doesn't sound too crazy. Maybe I should demand that much respect. Maybe I can be super confident.”

Is it helpful to ‘fake it’ when performing, writing, or imagining new concepts? There’s an interesting dance between how we act and how we *want* to act.

Yeah. I think for a long time, my music has been like that — singing about stuff that I couldn't say in real life. And I grew up doing theater so I'm really interested in the concept of ‘pretend,’ the idea of living other lives. It’s helped me so much to have songwriting, to be able to imagine other ways of being. Otherwise I’d just be stuck thinking, "Oh, I'm just an anxious person. That's what my whole life is going to be."

I wrote ‘SUPPLY & DEMAND’ and I feel like I got to let out a part of myself that in the moment I thought, "That doesn't sound like me." Looking back, I realize, "No, that is a piece of me, and that piece is real, too." And once I made it, because my self worth is so tied to my music, I was like, "Wait, this is fire," and then I felt better about myself.

Does reaching new benchmarks — be them your first show, a TikTok blowing up, hitting a certain number on streaming — help you gain confidence?

Lately, though, I've really just been trying to shift my perspective. A guest speaker at my class was talking about a big major label deal she had, and it sounded horrible. Then she became an independent artist and she's been thriving ever since. So I’m trying to shift my mentality from feeling like I need a major label to recognizing that I’m already finding my audience and reaching people on my own. I’m doing what a label is supposed to help me do… on my own.

You’ve called yourself a Latina pop princess, but of course, you’re much more than that. As you sit at the intersection of several genres and cultures, what are some misunderstood narratives about Latin music and culture?

The number one thing is that it's a monolith. I'm Cuban-Argentinian and my mom's parents are from Spain, and all three of those cultures are so, so different from each other. Yet the way we're represented in American pop culture is one-dimensional. People often associate Mexican culture with all Latin culture. Or they think ‘1950s and bright colors and bananas’ when they think about Cuba — things that aren’t current or necessarily relevant anymore. I'm also really concerned with how Latin women are seen in the media and in culture. The common stereotype is that we're spicy, sassy, sexy, and passionate. We're all the same tan, ambiguous shade of brown, and we have wavy hair and we're curvy and not smart.

I have been racking my brain trying to think of any major Latin artists in the industry that have been non-white, because all of the ones I can think of are white or white-passing and that’s just not an accurate representation of what our community looks like. Growing up, I would tell my mom, "Oh my God, Shakira has curly hair like me." And that was really important to me because I didn't know that adult women had curly hair, because a lot of Latin women straighten it out so much that by the time they're adults, it's straight. Halloween would come around and I didn't know what outfit to wear because I couldn't think of any main character, any celeb musician that I admired that really looked like me, that people would get and recognize.

What role do you want to play in terms of painting a more accurate representation of Latin women in music?

I want little non-white Latinas to look at me and think, "Okay, wait, I am a part of this community, too." Latinidad is not a race. Ethnicity and race are two separate things and there are black Latines and white Latines and mixed Latines, and a whole bunch of different things in between.