2.3 million streams – thanks to a chance run-in with a clown. 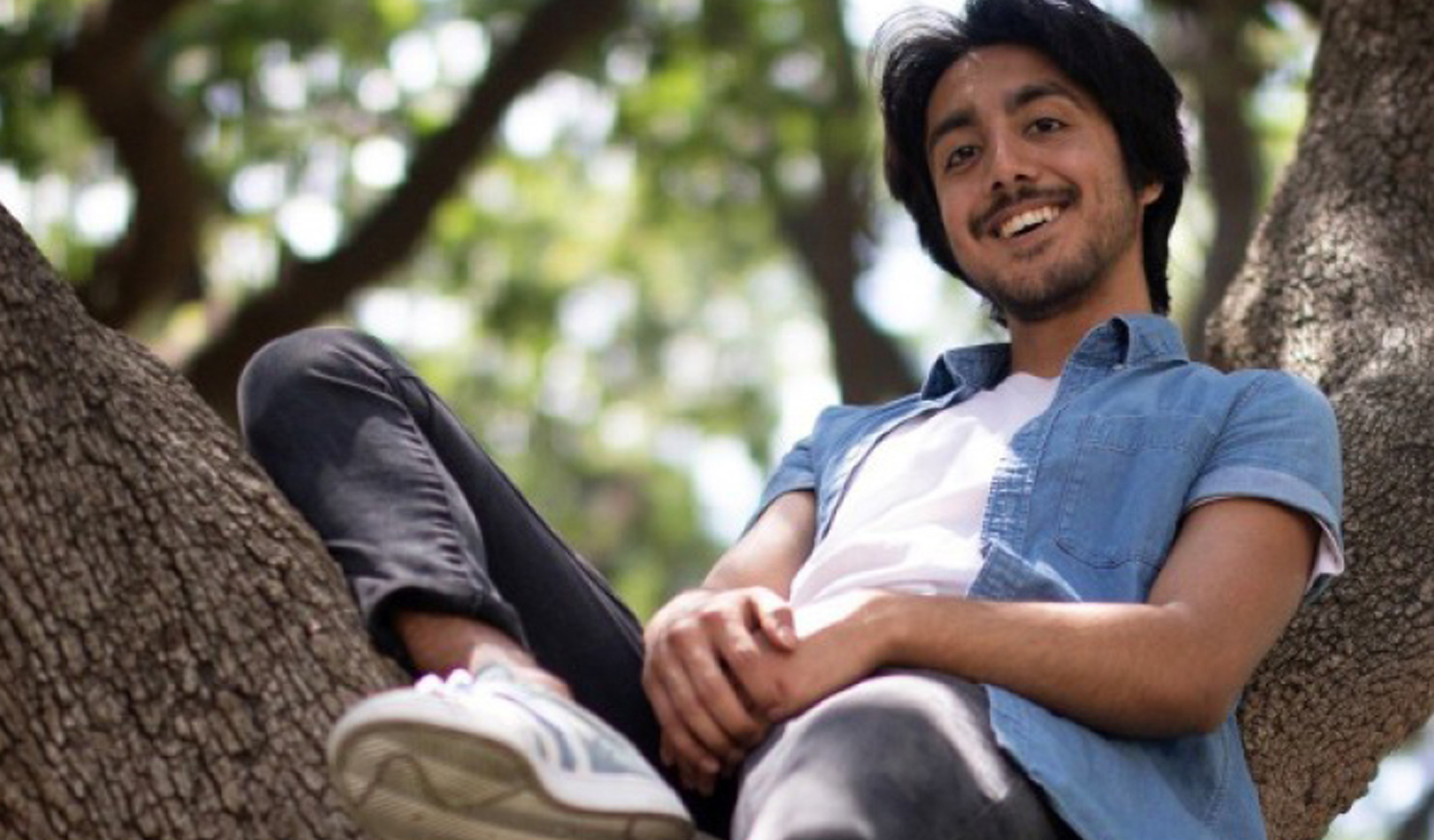 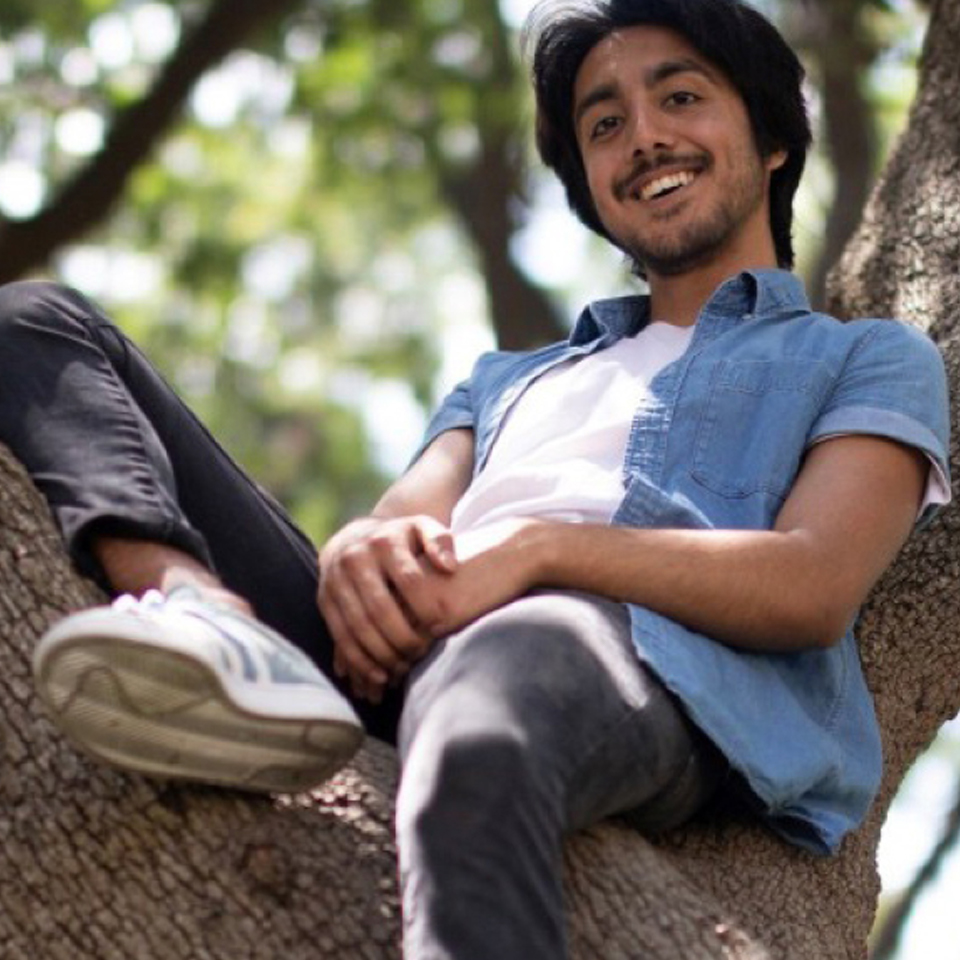 When AJ Abdullah uploaded the first song he had ever written to streaming services, the only thought in his head was “I hope people like this.” Two years and more than 900,000 Spotify streams later, it’s safe to say people actually more than liked the song -- a shimmering, ukulele-driven bedroom pop ballad aptly titled “Falling in Love.” Since its release the summer after his freshman year at UT Austin, the acting-turned-advertising major has released a slew of vibrant indie (and always uke-leaning) tracks that prove his debut was just the beginning for an artist who seems to only get better at writing hooks.

For AJ, his instant streaming success after what (compared to many in the industry) was a relatively late start in songwriting might not even be the craziest part of his musical journey.  Consider this: the Dallas native doesn’t even consider himself a musician. “My standard of musicianship is so high because I grew up around so many talented people,” he says to explain. “So I’m like, ‘Oh, I’m not a musician.’ Because I’m really just trying my best.”

AJ’s parents, who immigrated to the US from Pakistan as teens, are supportive -- his mom even made him playing ukulele her ringtone -- but even AJ admits they intended for him to pursue a career that would pay well after college.

So how did this happen? How did the son of two business-minded Pakistani immigrants end up a Spotify favorite with a penchant for character acting? Well, had it not been for a chance encounter with a clown in the fifth grade, it’s possible none of this would have happened. That’s right -- if not for a clown. Read on to find out what that was all about, and what else makes AJ Abdullah tick.

All right, so, tell us about this clown.

In the fifth grade, my class was on this tour of a middle school where they have all the different electives and are trying to pitch you to join. My friends and I had always been jokesters. So my class walked into the theater room and there was someone dressed up as a clown. I was like, “Holy shit. I want to do that. I have got to be a clown.” I had never felt such certainty in my life. That was literally my breakthrough moment. I was like, “I have to be a clown on stage at least once.” I’ve never actually been a clown, but I have been on stage a lot since then.‍

So that kicked off your acting journey. Of all the times you’ve been on stage, what was your favorite character you’ve ever played?‍

I got to play a little singing werewolf named Amos Calloway in a production of Big Fish at the Texas Thespian Festival. It was the most over-the-top character I’ve ever played, and I also had my own song. Usually wacky characters never get to sing, so it was nice to have both opportunities.‍

Growing up on stage must be a big help in how you perform your own music now, right?‍

Funny you should say that, it’s actually the complete opposite. I love acting, but I was a true character actor, so I’d play really big, crazy characters. I would have the insurance of looking like a doofus on stage and I could be like, “Oh, it’s just my character, ha ha, the audience will laugh if I mess up.” But now that I’ve gotten into performing my own music, it feels extra vulnerable. Because I’m like, “How do I act as myself, bro? I’ve never learned this.” I think singing someone else’s music is so much easier, because with mine, I’m just so exposed at that moment. ‍

Nearly all of your songs feature beautiful ukulele chord progressions and riffs. Tell us how you went from being a crazy character actor to playing the uke.‍

First, I honestly just thought the instrument was...just so cute. And then that cute sound really worked with my ideas that I had had beforehand. All the mystical theatre songs I’d written were all really cutesy, really light, almost. So I thought the uke would compliment that well. The second biggest thing was the feasibility of the uke. I didn’t want to do the tough learning curve of a guitar. And piano -- I had tried piano like every year, but it’s a thing where I’d be like, “All right, I’m going to learn it,” and then give up the next week. So honestly, uke was just the fastest way to make music. ‍

When you’re not in class or making music, what’s your experience been like at UT Austin?‍

It’s been great! Coming in as an acting major, I did a bunch of plays at first, but then I changed my major over to advertising my junior year. Now, I feel like I’m pretty much done with acting -- but that’s not to say I’m completely done with theater. I love playwriting. A couple years ago, I actually got to write a play and then perform it at the UT New Works Festival. I’d love to potentially turn it into a screenplay. Overall, between music and theater, I think I just consider myself a writer. I definitely do not consider myself a musician -- I think my standard of musicianship is so high because I grew up around so many talented people in theater. So I’m like, “Oh, I’m not a musician.” Because I’m really just trying my best. But hey, I hope that within these next few years, I do become a musician.  ‍

Between acting, making music, playwriting, advertising...where do you get your creativity from? Your family?‍

So funny enough, my parents are super business-minded. Their circumstances were pretty interesting growing up -- they immigrated here from Pakistan when they were teens. They met in California and then they moved to Texas, but honestly, they were pretty much in survival mode. They were just trying to find a life, find it fast, and build as fast as possible to make it here. So I don’t think they really got a chance to dive into their interests or creative pursuits as much. I do know that my dad loves to sing, he’s constantly singing, all the time. So I’m pretty sure I get it from him. And I’m pretty sure I get my sense of humor and my desire to grab attention from others, which is acting, I guess, from my mom. But job-wise, both my parents are super corporate, super business-minded. ‍

How do you want your music to make people feel?‍

I just want people to feel a little love, feel a little yearning. Because I feel like that’s mostly what my writing is. I want someone to feel love, but in a happy context, because I feel like love can be taken in a really sad context all the time. If they think of someone else when they listen to my music that could be really nice. I think that’s the best. One of my favorite parts of all the songs I’ve written is the bridge of “Oh, the Moon!” That really soft part, I just think it’s like a nice little ribbon at the end of it. I want people to feel that moment.‍

Is there an artist right now that makes you feel that way?  Maybe someone you’d most like to collaborate with?‍

Oh my gosh, Khai Dreams, the dude is just...he is the blueprint, honestly. His songwriting just pulls me in. He’s inspired me to diversify my pallet, listening-wise, and also with what I write. Everything he writes is so poetic. Even his shortest, most simple songs are so packed with emotion, just from the writing.‍

How do your parents feel about your music?  Do they want you to get a more corporate job when you’re done with school or are they supportive of you going after music full-time?‍

My mom is super cute about my music! I released a little clip of myself playing the uke on Instagram and she made it her ringtone. That was really funny, but then any time her phone would go off I would cringe just hearing myself. They’re both really sweet about it. It’s funny, the more success I’m finding, the more my dad is thinking like a corporate guy. He’s like, “Man, you could make some money off of this...you could make this like passive income.” It’s cool to see him appreciating my music as having security value, rather than just seeing it as my art.

As far as them wanting me to get a corporate job, I think they fully intended for me to get a job that would pay well after school because they want the best for me, and for me to have the opportunities that they didn’t when they immigrated here. So I definitely keep that in mind and respect it, but at the same time, I think a big part of the American dream is to chase what you want. So I’m trying to see how we can balance both of our needs and make music more than just a hobby for me.‍

Up to this point, I feel like I’ve acknowledged my success in music so far as it being something I do on the side. So I do want to go one hundred percent for at least a year or two after school and just see what could happen. Hopefully, after I establish myself a little more, I can then start looking for a more corporate job.