When your truest self means changing your name. 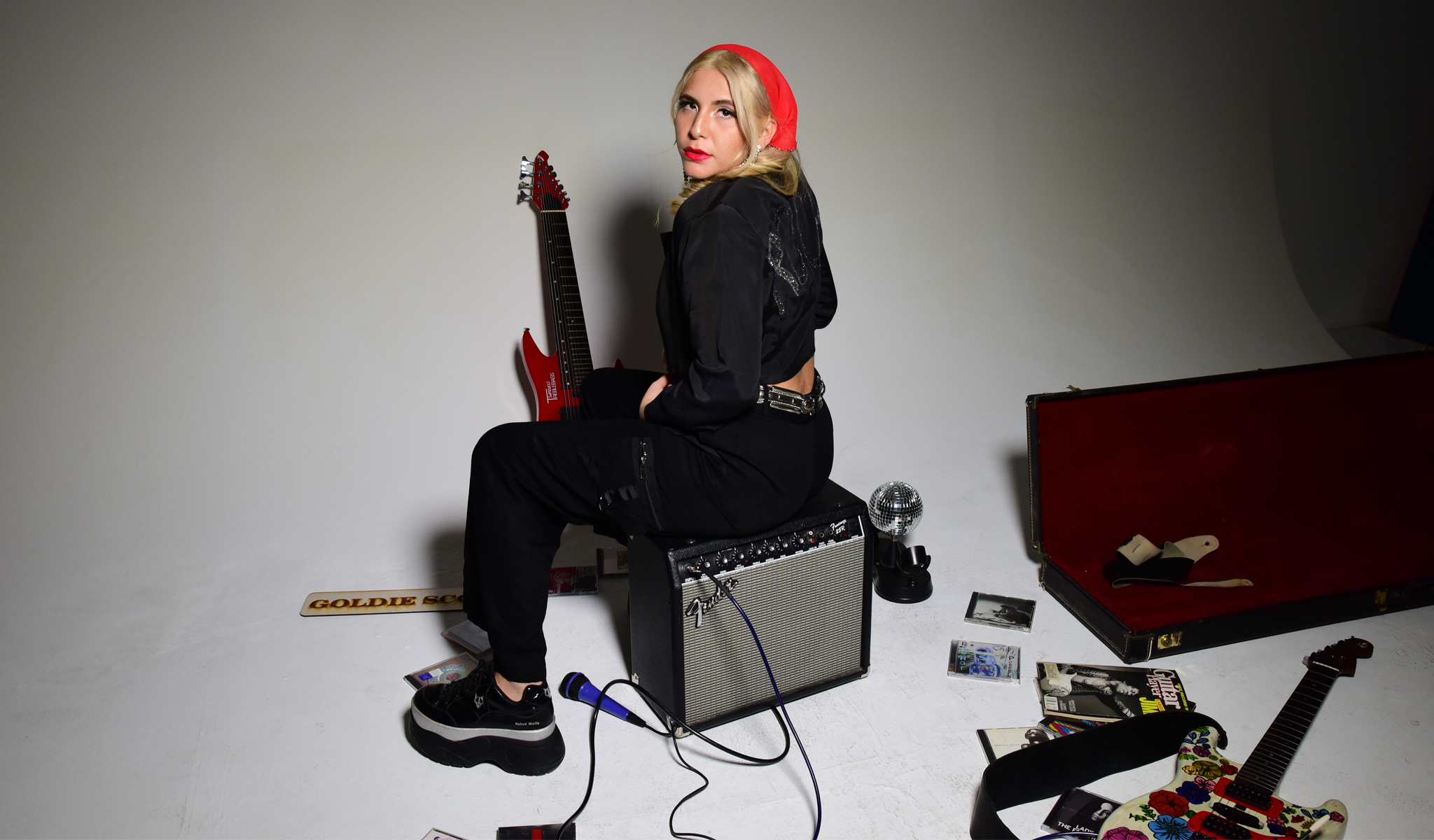 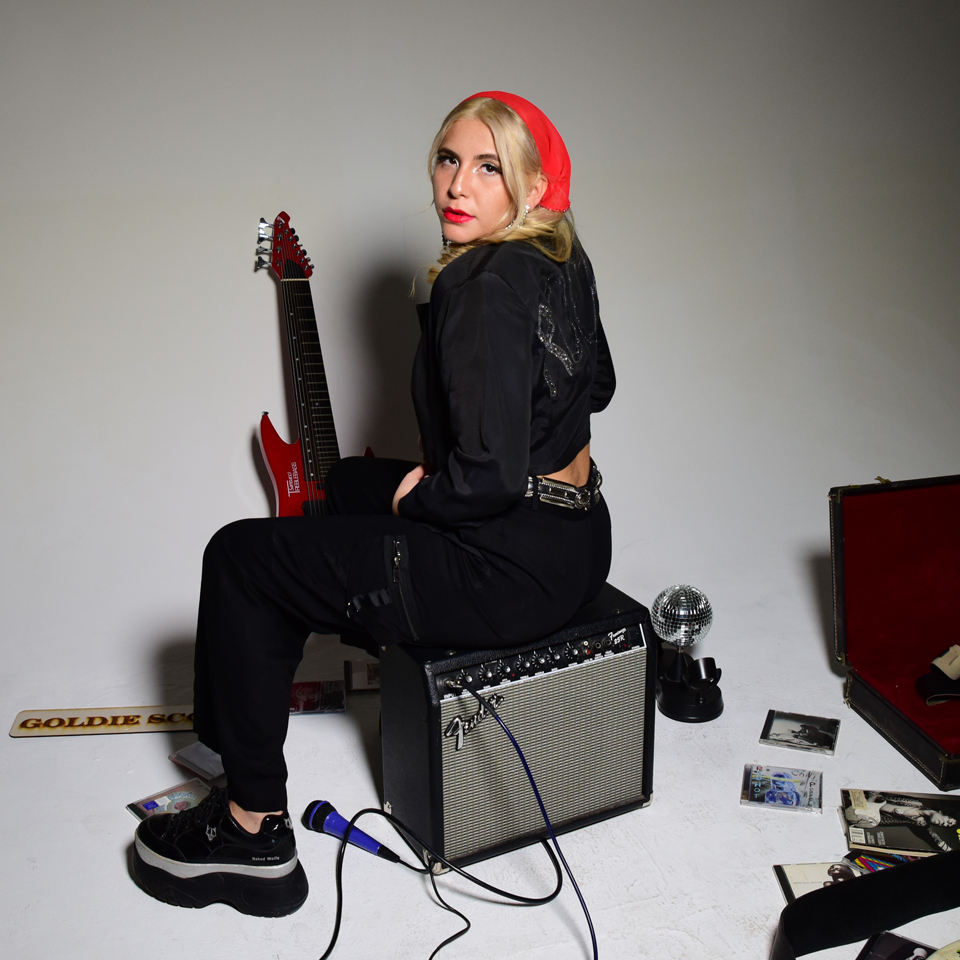 Okay, so you haven't heard of Goldie Scott. But there is reason to believe the Berklee College of Music junior might be about to change that fact. She has a strong, husky singing voice, in the same vein as powerhouses like Miley Cyrus and Duffy, making it no wonder she went to Hollywood during her run on American Idol. And her look? It's cowgirl, Stevie Nicks, and 90s Gwen Stefani all rolled into one -- and totally original. In conversation, her star power feels so, well, natural, that it’s hard to believe she wasn't born to be famous...someday.

That self-confidence, though, is blended with huge (and appealing) doses of candor and humility. After being eliminated from American Idol last year, she admits she felt completely adrift. "I remember crying so hard, not because I got eliminated, but because I just had no idea who I was or how I was going to make it happen for myself." Goldie took a semester off to answer both of those questions (and wrote a song with 127,000 streams in the meantime). She will tell you she found her identity, too, freeing herself from the expectations of a conservative family and years of bullying, and becoming the fierce young woman she may have been, underneath it all, all along.

Quadio spoke to Goldie about her journey to self, as well as the absurdity of comparing yourself to Kendall Jenner, the way a pole dancer helped "Desert Queen" go viral, and the meaning behind her newest single. Read on.‍

‍Why did you choose the artist name Goldie Scott?‍

I changed it after I was on American Idol. All of the people I met on that show were really committing themselves to fully doing music. They were so hardworking and most of them knew their artistic identities, but I just felt like I didn't know mine. I was going to Syracuse, in a sorority, living a completely different life. It made me feel like, "Okay, I really need to buckle down and focus on my craft." So after Idol, I took a semester off and I ended up interning at an independent record label in Manhattan. I told my boss there I made music, but at this point I hardly had anything out. It was under the name STEF, and it was not well-produced. He was like, "You're not going to get anywhere with that name." I suggested Goldie Scott, which was a name I had already thought about. And he was like, "That's a pretty fire name for a Jewish blonde girl." And I was like, "All right, I'll think about it."

So it wasn't immediate?

I let it marinate for a few months before actually making the switch, because it had to mean something profound for me to commit to it. I went to LA and did a photoshoot in the desert there just for fun, and the day after, I was so inspired by the desert landscape and the power of the moment that I wrote "Desert Queen," which was my first Goldie Scott release. That really helped, because it meant I had something tangible to put out under this new name, this new image.

Scott Drive is the street I've lived on my whole life. My family has conservative values and they're pretty religious, so growing up I definitely felt really boxed in. Scott is representative of all of those things in my life, and all of the things that have held me back, the negative thoughts, people telling me things like "You're not good enough," or "You won't make it." And Goldie is representative of my free-spirited soul-self, who I feel I am to my core, and it's more West Coast, where I feel the most free. But the whole point of the name is that the things that have been negative in my life are what made me who I am. My dad was like, "You're going to change your name to Goldie Scott? I thought you wanted to be authentic." And my response was, "That is being authentic. That's who I feel like I am." I think that I've been able to gain confidence from the name because I can step into this role and play a part in a sense.

Is self-confidence something you've struggled with?

I was overweight growing up, and I was bullied. I wanted to be a dancer, but I quit because I would get made fun of and didn't feel confident standing next to the skinny girls in their costumes. I understand what it's like not to be desired and not to fit in. But those things have just made me more of a real person, the way I write and the way I think...I didn't have confidence in myself for a really long time. ‍

How did you end up finding that confidence?‍

From working hard and knowing that I'm doing my best. If I'm doing what's best for me, that doesn't mean that I'm not going to fuck up when it comes to food or exercise or whatever. But I stopped comparing myself to models like Kendall Jenner. I compare myself to what I've done in the past or to the future me. I'm only in competition with myself. I would say I'm 50% confident and 50% insecure and that just is what it is. I think that I'll always have body image issues, but I also know I've come so fucking far.

It's the same with music. It's important to realize, "I'm on my own journey, I'm doing the best I can in the moment. And it's not my time yet." It's so hard to not look at what other people are doing and compare, but you're not them. Your life is completely different. So just remind yourself that you're on your own journey.
‍

How long has music been a part of your journey?‍

Honestly, it goes as far back as my great-grandmother. She and her family lived in Poland and they were all performers, actors, singers, and poets. And then the Holocaust happened and they lost all those opportunities. I really feel like all of the things I've been blessed with in my life are because my ancestors went through such hell and they didn't get to use their gifts. So in a way, I feel like I have their voice inside me. My mom can sing, too. And my dad is a bassist. In his earlier days, his band opened for Meat Loaf and The Marshall Tucker Band. He's a lawyer now, but he still gigs with his band.‍

They must have been so excited when they realized you could sing.‍

It wasn't until they got me a karaoke machine when I was six and I sang "Reflection" from Mulan that they were like, "Oh, shit. She can actually sing." I started writing poetry around then, too. I was introduced to poetry in my first grade class, when we had a whole month devoted to it. I instantly became obsessed with rhyming. I wrote my first real heartbreak song when I was in sixth grade, and from then on, I just kept writing songs. Freshman year of high school I picked up the guitar and started to teach myself basic chords. I got back into piano, too. I had taken piano when I was young, but I didn't want to read music, I didn't want to learn music theory. So that didn't work out very well. I just didn't want to follow directions, ever. I always loved to improvise.‍

Okay, so you take the semester off post-Idol, you write "Desert Queen," but then you don't go back to Syracuse. Was that because the song did so well?‍

Well, it landed on two different Spotify playlists, which really helped. Also, a popular pole dancer in Abu Dhabi who goes by the name "Queen Pole Dance" searched "Desert Queen" on Apple Music, just to see if it was a song. She's the "Queen" of the desert and posts dances to all different songs on Instagram. She found my song and posted two dances to it. She has a big following in Abu Dhabi, and the song hit number two on the alternative charts in Dubai. I was like, "What?" I just found that out, I had no idea.

I never really planned on returning to Syracuse because I knew that I got what I needed out of it. I loved Syracuse and still do, but my journey there was over. I transferred to Berklee School of Music online. It's really enabled me to fully dive in and just focus on my art. I feel like I'm taking classes that are helpful and I can put most of my energy into actually creating music.

And how are you doing that?

I've been working with a new producer who I came across on Instagram. I found "Bassy" Bob Brockman, who is a Grammy-winning engineer and producer. I was like, "Okay, I'm going to slide into his DMs." I did, and we got on a FaceTime call. He was looking for a female top-line artist at that exact moment for something else -- that was the only reason he answered right away.I didn't end up doing that project, but it all happened for a reason. He's in New Orleans, so we started working remotely, and then in November I moved there for two months living in the shotgun apartment next door to him. We worked on about 10 different songs. I learned so much from him and from New Orleans in general. He's the executive producer on my latest projects and on "RaRa," my newest single.

Let's talk about "RaRa." It just came out on Wednesday.

I wrote the song in June when things were really crazy in America. Before the pandemic, I was wearing rose-colored glasses. I truly had a false sense of reality. The pandemic was a reality check, where I realized, "Wow, there's a lot of shit going on behind the scenes. There's more to what's actually happening in America than I know." And obviously that sounds naive, I was very naive, and I'm still learning. The song is about all of that chaos and division triggered by the false narratives being told in the media. It's a satirical take on the state of things right now.

What's next for you?

I'm going back to New Orleans in April with Luke, my other producer, and we're going to finish a few songs we're working on. I wrote so much during this pandemic. I would say I have enough content for the next few years, songs across all different genres. But I have to perfect them. I'm a songwriter more than anything else. Something I've realized is that a lot of people have great voices, but not everybody has a story to tell. I have a story to tell, and I refuse to settle for a life that is unfulfilling. That doesn't mean fame. It just means getting to pursue this thing that I love to do every day.