He grew up wanting to be a therapist, and now, by way of the coolest Uke Trap you’ve ever heard, he kinda is. 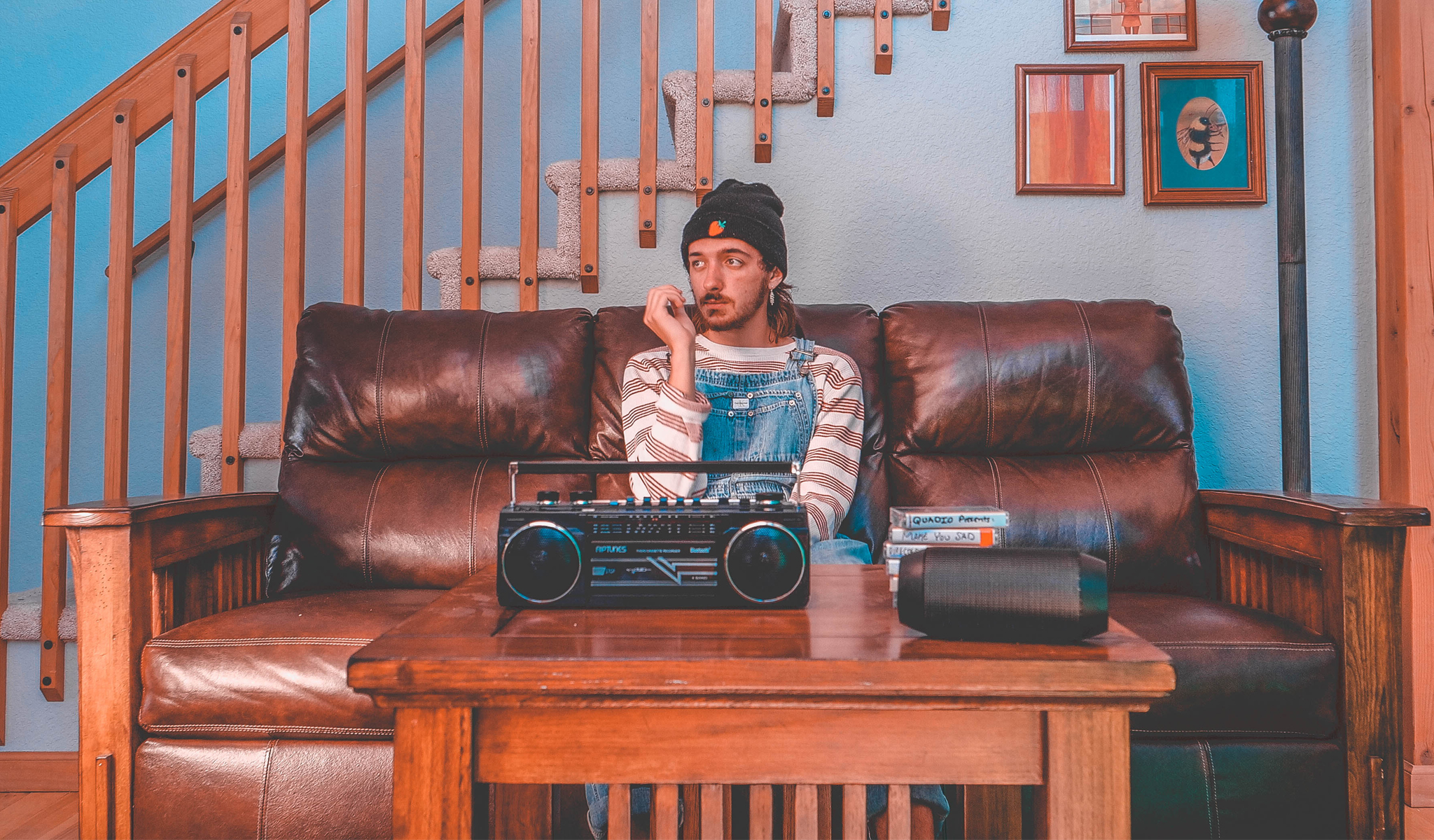 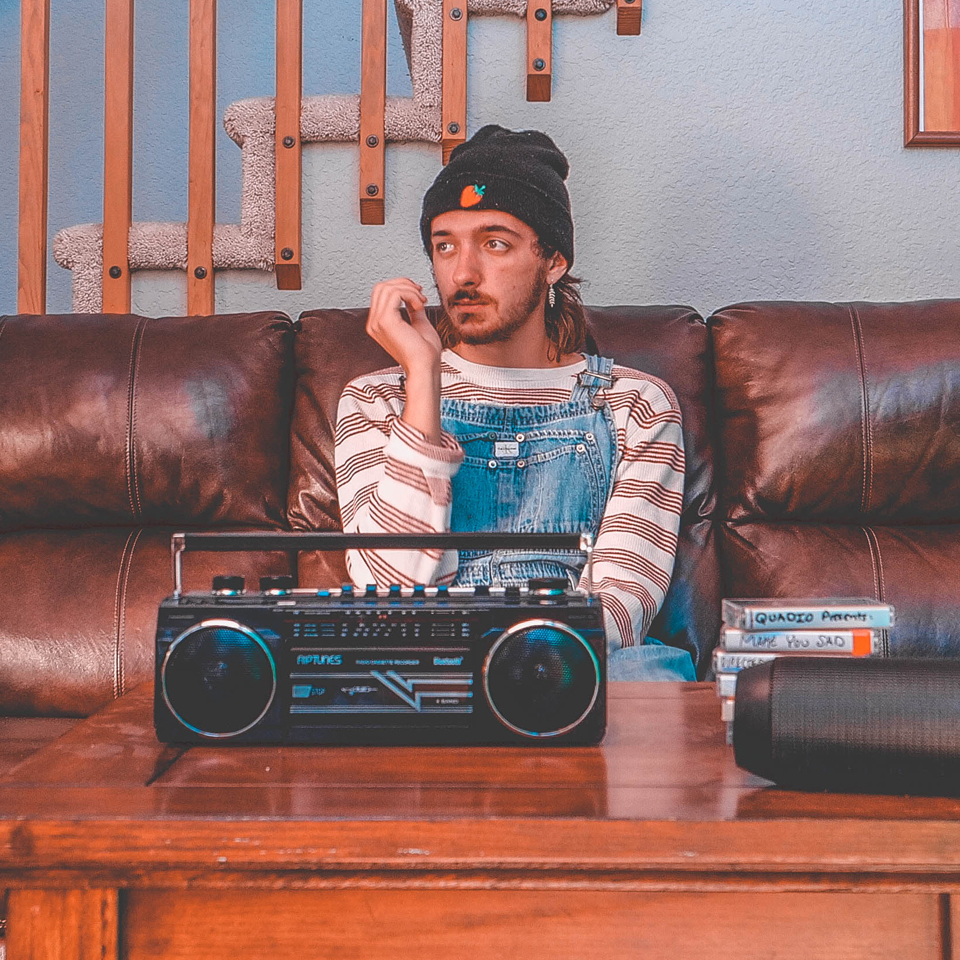 When you’re logging a half a million streams with glistening folk pop hits in high school, then segue to crushing, Bright Eyes-evoking lo-fi emo jams in college, hooking yet another cohort of devoted fans, what could possibly be your third act? For Bryce Waitkus, the singer-songwriter/multi-instrumentalist behind War is Over and Okay Alright, you adopt the name healer and start making heartfelt, danceable indie bangers about the very real hope that mental health challenges can be overcome with self-love and supportive community. Oh, and you dub your quirky/catchy new genre “Uke Trap.”

“I would say all my projects are parts of me; I love all the genres I’ve worked in,” healer says to explain his new direction. “War is Over was a duo, where I was mostly bringing the instrumentation. Okay Alright was my first venture on my own, and it was like, ‘Dang, I’m sad,’ and that’s where the message often ended. Now, with healer it’s more like, ‘I’m sad, and that’s okay.’ Accept it, feel your feelings, and figure out how to grow from there.”

“Honestly, I want to be able to have fun with music, too,” he says. “I just want people to feel good and be able to heal and grow through art.”

Quadio caught up with healer on the day before he left his house near Cal Poly in San Luis Obispo, CA to return home to the small town near Chicago where his personal (and professional) journey began.

You grew up thinking you were going to be a clinical psychologist, right?

That was always my plan. Helping others always felt right to me; my mom is a therapist -- she specializes in teenagers -- and when I was in middle school, she gave me the opportunity to put together community groups for other kids and teens. Every week, I would choose a mental health topic, like suicide prevention, research it, talk to my mom, and then lead discussions within the group. Some of the people who were in those groups are still lifelong friends. I think a lot of intentional healing came from them because of the power of being around other people who want good things for you, and can be there to help you through your problems. That was my first taste of “healing” and it snowballed from there.‍

How did music fit in?‍

I started taking guitar lessons in fourth grade. Back then, I basically just played a bunch of classic rock; I was really into the Beatles and Red Hot Chili Peppers. I mostly just absorbed what my parents had shown me.

The big moment for me was when I was about 13. My uncle, who I lovingly call “funcle,” gave me a list of bands that included Mumford & Sons and The Lumineers and that kind of thing, and when I listened to that list, I was like, “Oh my God, I didn’t know music could be like this. What the heck is going on?” I knew that there was something in that sound that I needed to understand and capture, and that was really the beginning of me really thinking about music as a part of my identity.

Making music -- it made me feel more comfortable doing stuff that I normally wouldn’t do. Because, I mean, in high school especially, I was such an introvert. I was really anxious, and I think I dealt with that mostly through music, playing shows, and just having to be okay with people seeing me all the time. It really made me a lot more confident. And definitely through middle school and high school, music was also just how I had fun most of the time, whether it was listening, playing, writing, collecting records, or going to shows. It was how I processed my emotions and documented my experiences, and it just started becoming more and more a part of who I am. ‍

It’s a big jump from making music for fun to hitting Spotify’s Discover Weekly with your first song.‍

Well, I was really lucky because I grew up a block away from my best friend, Cam Young. We really grew with each other, in terms of songwriting. We would just make these silly songs at first, like in middle school, we wrote one called “Meow the Cat.” It was never meant to be heard, but it kept evolving and growing, and by high school, we were writing songs together that we were like, “Dang, these are pretty good. Maybe we should try to actually do something with this,” and so War is Over was born.‍

Is it true your high school would play your music in the halls everyday?‍

Yeah! They were always super supportive. I’m sure that’s part of why we decided to release our songs, and then, the first two, “Don’t Bring Me Back,” and “Angelica’s Room” got on the Spotify playlists. At that point, I was finally like, “Okay. I’m going to figure out how to do this for a living. This is my passion. Clearly, it’s working out pretty well, so I want to figure out how to do this.”‍

Still, you went to Cal Poly to study Psych -- because?‍

Because you never know, and that feeling of not knowing for sure, when you’re an artist, you know, it comes and it goes. I grew up in an upper-class town, it was very white, and I had a classic nuclear family and went to a really competitive high school. And so, there was a part of me that always just felt that like, if I was going to do music, I had to figure it out on the side. I had to have a “normal” job.

And also, in high school, with War is Over, I wasn’t singing yet, right? I was doing all the instrumentals, guitar, banjo, keyboard. In college, Cam and I weren’t in the same place, he stayed in Illinois, and I had always known I wanted to find a way to make music that was personal to me, and have it really be my own product. I really wanted to make music that was just completely, genuinely me -- honest, almost honest to a fault. Music that would help people see that it's okay to present yourself to the world like that, because I don't think a lot of people do. So that time alone was really good for developing my own identity as an artist, away from anything else.

Is it true you finished college in two years?‍

A couple of weeks less than two years, on the dot. I took a lot of AP classes in high school, and loaded up my schedule in college too. And mainly because yeah, I wanted to get to doing music faster. ‍

Was Cam OK with you going solo? You’d done everything as a duo up to that point --‍

Cam is actually like ten feet away from me right now. I mean, we’re best friends, and he’s helped me with some of my healer stuff too. He always gives me opinions, and sings harmonies and all that. No matter what projects we’re working on, I know we’ll each be there to help out and hype each other’s art. We’re still writing War is Over songs too, and I think the stuff we’re writing now is by far the best stuff we’ve ever done. Honestly, I think that War is Over is just as much on the verge of good things. So, yeah. Cam, are you supportive? He says he’s totally supportive.‍

Ha -- ok. The result of your solo journey in college was the album you released as Okay Alright, “Everything Lost to the Light,” and we’re not going to lie, that’s some sad music. Beautiful -- but sad. ‍

“Everything Lost to Light” was me figuring out what was going on in my life and who I was. I was thinking a lot about what stays the same when you grow up and what you have to leave behind. I definitely explored a lot of different emotions and experiences, and it’s true, I get a lot of messages on Instagram from people saying things like, “I just cried to your album all night.” It’s really cool to hear people really deeply connect with it like that and I’m honestly so proud of that album. But finishing that album was when I was finally like, “Okay, how can I help a lot of people heal, instead of just me?”‍

Is that part of what spurred your change of direction with healer?‍

Absolutely. I think these days there’s still a lot of shame in experiencing anxiety or depression. Mental health is still not an easy thing to talk about, although there are a lot of people and influencers and artists who are starting to change that. People often think to themselves, “Don’t feel those things,” or “Numb those things and make them go away right now,” or “Talk about those things in private, or not at all.” We need to get people feeling okay with owning what’s going on with them and being able to talk about it without it defining them or holding them back.

With healer, I want my songs to help people understand that there is always a way through the hardest struggles of our mental health to solution and resolution. I want people to feel happy; I want to make songs that are easy to listen to and to dance to, but then maybe you have a moment of realization, and you cry to it, too. All of the emotions are there, including optimism.‍

Aren’t you sort of a therapist through your music?‍

Ideally, I’d love for healer to expand past music and become a platform for positive change. I want to build a community for people to feel supported and find resources for self-help. I think at first, this would be through music, and eventually through other content; and I’m excited to see how that develops going forward. I guess mainly I just want to build a soft space where people can feel comfortable being themselves, and maybe find others who want to make the world a better, more loving place too. So, my current thought process is like, “If I can really pull off what I’m trying to do, then instead of using my psych degree to help one person an hour, I would be able to do that on a lot larger of a scale.” But really either way, I’d be happy.