Famous at 12 for her voice, at 18, a changed person, she became a voice for others. 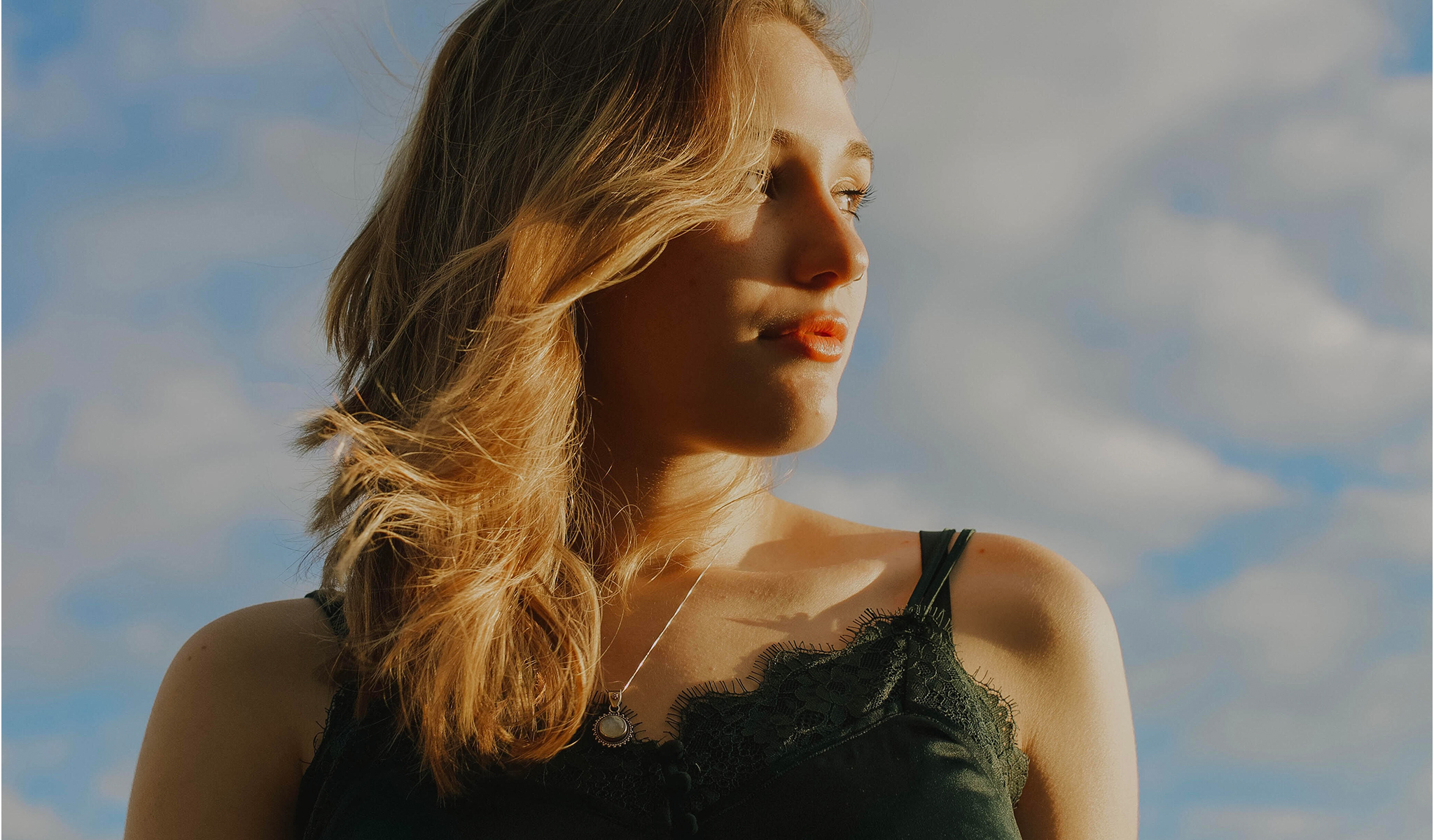 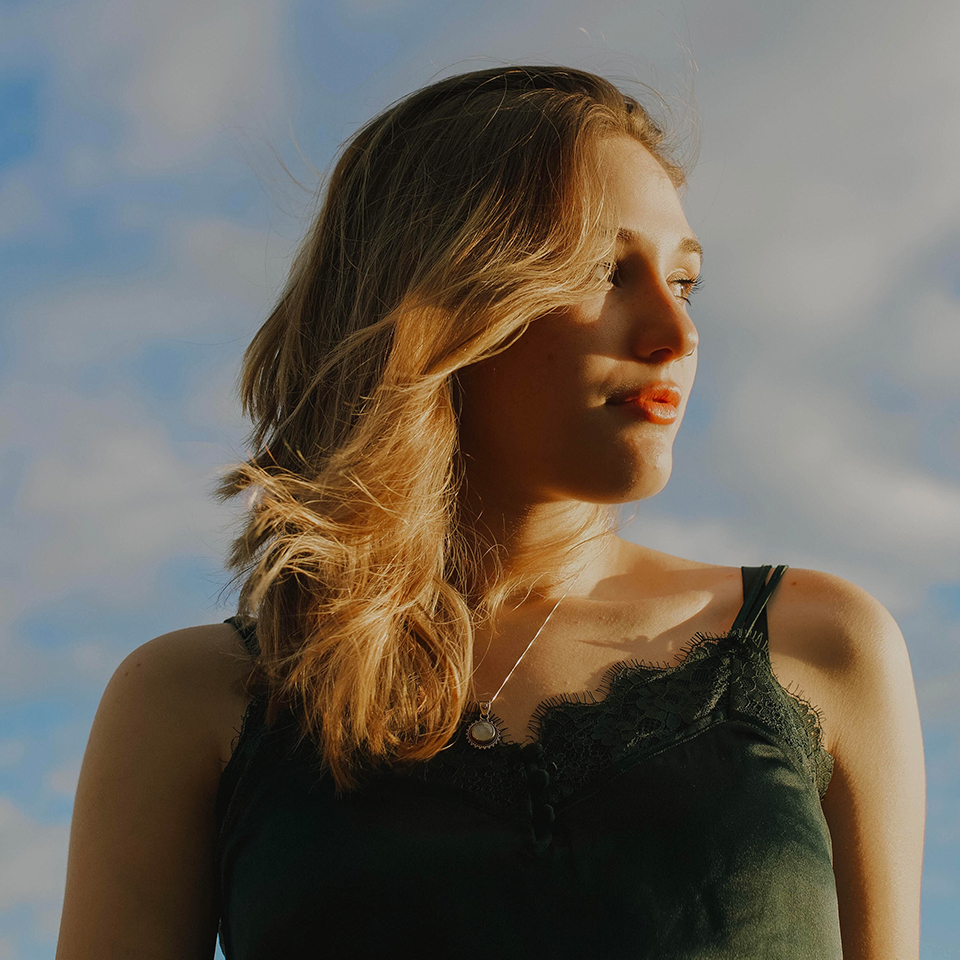 It started as a lark. She had a unique voice, people said, preternaturally mature, unusually poignant and smoky––especially for a girl not yet a teenager. So at the encouragement of her voice teacher, Jo Strogatz, the artist now known as Canen went to a studio near her hometown of Ithaca, NY and laid down six covers with a small band, including a cello. One track was Bill Withers' iconic "Ain't No Sunshine," hardly a stranger to remake attempts. But Canen's version was different: searing in its emotional restraint, deeply intimate, and oddly (again, for a kid) powerful.

The YouTube video, which is now approaching 10 million views, launched Canen into a fast-start of musical festivals and enviable opening gigs, for the likes of Todd Rundgren and Asleep at the Wheel. Her voice quickly gained fans for its beauty, with comparisons to Adele and Norah Jones, and after a few years, Canen began trying her hand at writing her own music. In September 2020, she enrolled at Tufts with a self-designed major exploring the intersection of music and culture, in hopes of perhaps someday becoming a singer/songwriter herself.

No music career follows a straight line, but this is where Canen's changes course, the outcome of a sexual assault, which now has her lending her voice not just to music, but to a movement. Her new release, the poetically wrenching ballad "He Sleeps Lightly," chronicles her own trauma, but also draws on the experiences of crowd-sourced fellow assault survivors. "When I first wrote the song, I was writing it about myself," Canen explains, "but then it became something bigger." Quadio spoke with Canen about her life, her dreams, and how the "He Sleeps Lightly" multimedia project came to be, by video call earlier this week. ‍

Is it OK to talk to you about the genesis of "He Sleeps Lightly?"‍

Absolutely––I'm an open book. I wrote the song the night after I had been assaulted. I had such a clear vision of what the song sounded like in my head from the beginning that wrote it in about 20 minutes. I was still in shock, having a hard time processing what had happened, but also even admitting to what had happened, because it's hard when you feel like you've been manipulated into giving consent. I felt so many emotions at the same time that I almost felt numb. I felt frustrated, I felt angry, I felt hopeless because it wasn't the first time that my trust had been betrayed. The emotions were just too much for me to sit with, they had come out of me in a musical form. It really was therapy for me––the entire song just poured out. It started with me just playing two strings, and playing those two strings over and over and singing over it. I wanted it to be just my raw voice, so you're forced to listen to my words and the feeling in my voice. It creates an intimate effect that's a little bit terrifying to listen to sometimes. As a songwriter, I always write in first person, and this was the first time and only time that I've ever written a song in third person, because I had to disconnect from myself in order to even say what I was really feeling.

How did the song you wrote that night transform from the story of your own individual experience into a project that incorporates the stories of so many others?

It started when I realized that what happened to me was bigger than my story, that the lyrics "He Sleeps Lightly" apply to so many different experiences. The details are different in each case, of course, but there is still something survivors have in common, which is that we didn't consent, and, even if we did consent, it might not have been genuine. So, I put out a call on Instagram, asking people to submit to a Google form that I had made where it was completely anonymous. You could submit anything about your own story, or you could submit a clip of yourself holding up the date or what you had worn that day.

What was the response?

Unbelievable. So many people responded, saying this song is the first time that they really felt understood, or that this song is the first time that they've admitted to themselves that they were a victim. As I was reading all of these entries and assembling the music video, my friend asked me if it was triggering to read their stories, but I actually felt weirdly empowered because I think it takes so long to even get to the point where you can say, "I am a survivor." That alone is such a big step. Even if you're not ready for therapy or to look for resources, just saying, "This happened," and writing it down is huge. It still gives me chills and makes me cry when I read things that people have written. Even though this song is about a male abuser and a female victim, that's not always the case. I had people submitting to the video of all genders––a male survivor, non-binary people, victims of female abusers. When I first wrote the song, I was writing it about myself, but then it became something bigger.‍

What was your hope in turning your song into a kind of crowd-sourced video? ‍

Change, I guess. Relief for survivors, and to raise awareness. I grew up getting an education where we learned about consent in health class. So why does it still happen? How come I know so many people at my school who still have done this? It's not that they weren't listening. I think the reason is because there's so much gray area that isn't spoken about, like with relationships, for example. Just because you're dating somebody does not mean that you consent automatically to everything. But it's so much more than that. There's coercion. There's so many topics that are never touched on in school. We have to talk to each other more, about the hard, gray things.

I also wanted to use the video for people to know there was help available. I include a sexual assault hotline, and I am donating all the proceeds to RAINN, the Rape, Abuse & Incest National Network. RAINN the first place that I really looked at when I was so confused and I was trying to sort everything out. They had some resources that really helped me. This song is really more of a statement than an actual song. It was never about the streams on this one. It was never about the amount of attention that it receives. It's so much more about the impact.‍

Let's talk about the path that led to "He Sleeps Lightly." When and how did "Canen" come to be?‍

I started singing when I was 12 and I was posting videos on YouTube, which can be a really weird place sometimes, so my parents were like, "There's no way you're using the name Joanna Strogatz on the Internet. There's only one, and that's you," so it'd be super easy for people to come find me. Since I was into mythology, I decided to take Canen from Canens, the Roman goddess of song.‍

How did you know you wanted to do music at such a young age?‍

Music has always been a part of my life. I played violin when I was very little, and then switched over to piano, and then it really mainly became singing. My voice changed at around age 12, and that's when I really started singing. My mom was worried because she'd heard some horror stories about young girls who had damaged their voice early on, so she decided to put me into voice lessons. My voice teacher was basically like, "Something's weird here. This kid sounds like a 40-year-old jazz lounge singer. Let's get her playing with a band." So she brought me into the studio with her band, and we recorded six tracks. I don't even think I was aware of how cool it was at the time.‍

Did you expect your cover of "Ain't No Sunshine" to blow up the way it did?‍

We weren't expecting anything from any of the songs we recorded! They sat around for a few years, and then the video of "Ain’t No Sunshine" started spreading on Facebook and skyrocketed on YouTube. It's hard to comprehend almost 10 million people sitting in a room with me. I don't think it's something that I can easily process––I don't think I even have processed it. Performance-wise, it's given me a lot of really cool opportunities. But it is a little strange, having it be from when I was 12 years old, and I'm 18 now, and thinking, "Oh, I hope 12 wasn't my musical peak." That better not be my peak! But I see it as a musical photograph. I'm listening to myself at that point in time, and what kinds of things I did with my voice. I had very little training at the time, so what was coming out of me was completely unproduced. It's really beautiful, in a way. I hear how I use my voice differently now that I'm older and now that I've had more life experiences.‍

You're majoring in music, right, but not exactly music-music?‍

When I was looking at colleges, I was having a difficult time deciding if I wanted to be a music major or an anthropology major. And then I found Tufts, where they have this new music major where you can create your own curriculum. I love to explore the intersections between culture and music and I really feel like I'm stretching my mindset now. So much of my high school education was Western and Eurocentric that, now, when I'm studying Algerian rap, I'm like, "This is in Arabic, which I'm not fluent in," but I get to learn the context around the song to understand it and broaden my view.

I'm very driven by sounds. There's a lot of sounds that are missing in English that can be found in other languages. In Portuguese, there's such a specific "ow" sound, and it's almost an unnatural sound for me, as an English speaker, to make, but I love that. I love hearing these different sounds and trying to recreate them. I'm planning on double majoring in French. I would also love to be better at Portuguese. Ever since I was super little––I was just a really weird little kid––I've been a language nerd. I would take these Latin root cards and make stories out of them and teach myself languages and invent my own languages.‍

That's wild. What are you most excited about right now?‍

I just recently got into the female a cappella group here, which I'm really excited about! I also just joined the Quadio community, so I've been looking at everybody on the app and seeing other creatives at Tufts. It's especially important to connect right now, when I can't meet anybody on campus––I can barely get out of my dorm room! I'm also still very much exploring different styles and writing different types of songs. In the future, I would really like to get better at production and be able to do more things by myself, because I feel like I hear things so clearly in my head, and, sometimes, it's hard to communicate that to somebody else. That's where I want to be. I want to be a female producer. I want to produce my own stuff to bring my vision to light.