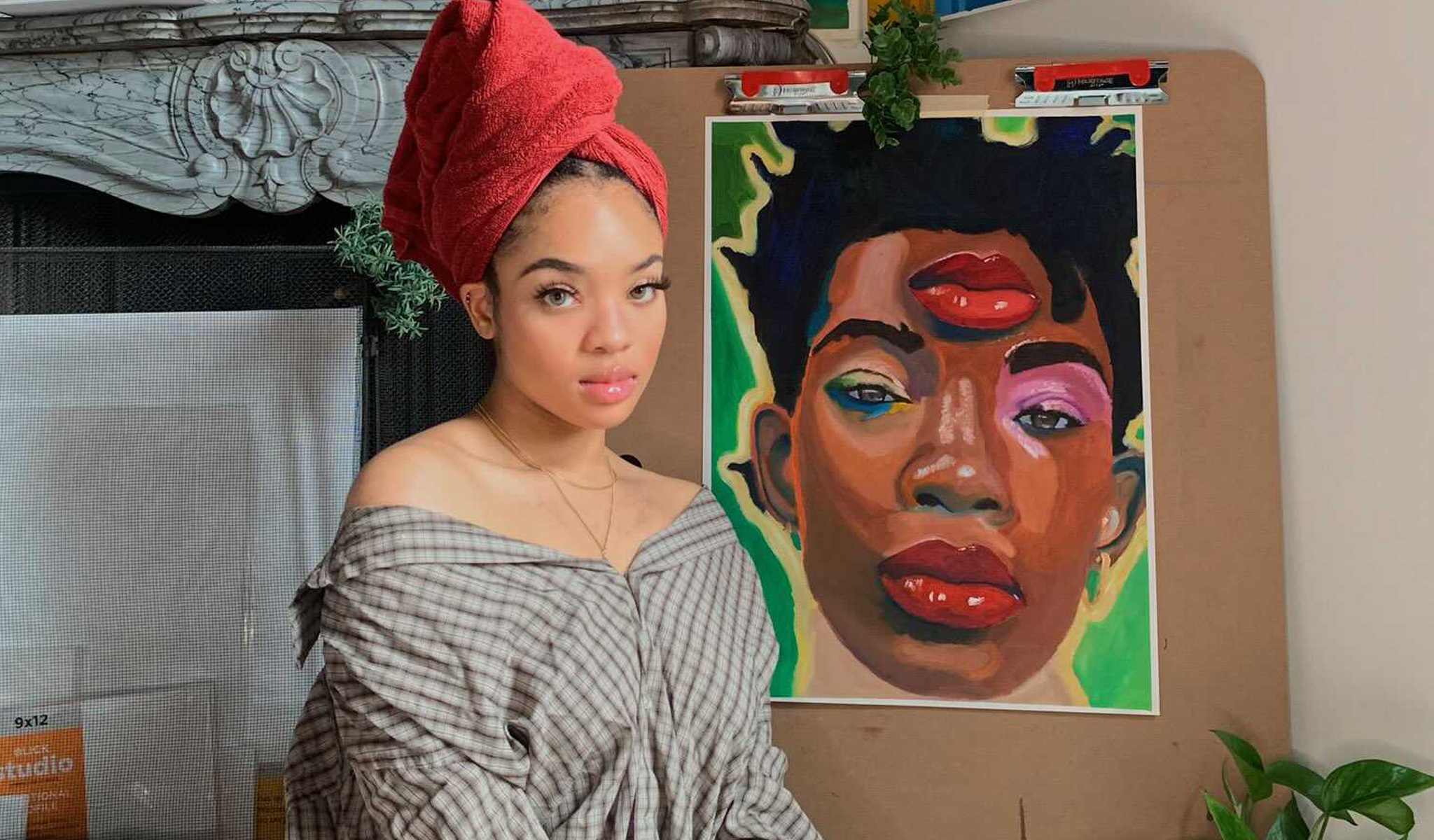 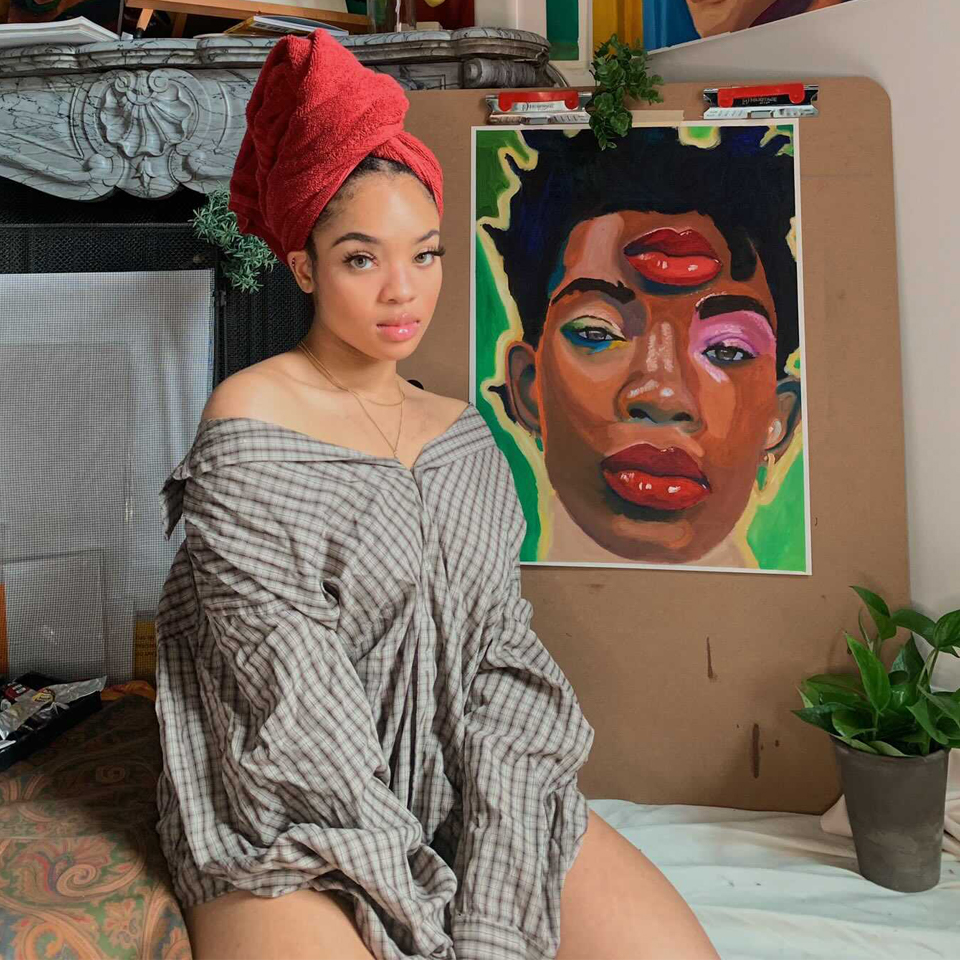 As many artists know all too well, convincing your family that art is a worthwhile pursuit is a challenge. “Even with talent, success is a one-in-a-million shot,” you hear. “How will you pay the rent?” “Can’t this just be a hobby?”

Now imagine your family is an integral part of American history, one renowned for its commitment to the cause of social justice for nearly a century.

Suddenly wanting to be an artist gets a little more complicated.‍

‍This week’s 10-in-10 explores just such a case, with its interview with Jessica Jackson, the UCLA junior who is the daughter of two politicians and the granddaughter of legendary activist and minister Jesse Jackson.

For years, her love of art felt like a distraction to her family, and sometimes even to herself. Indeed, after her parents nixed the idea of art school for college, Jessica had given up on art as a career entirely, turning her focus to a major in African American studies. Then came the pandemic.

With day after day of 2020 spent in quarantine-induced boredom, Jessica decided to pick up her brushes once again. But this time, her painting had new meaning and purpose. Special inspiration struck when she decided to depict Black women in a space usually populated by white women -- astrology -- and her art got sent into the viral sphere. Now, with 12,000 followers on Instagram, 7,000 on Twitter, and a cool 100,000 on TikTok, Jessica is living proof that art and activism need not be separate journeys.

Quadio spoke to Jessica via video chat from her apartment in Los Angeles.

Growing up amidst a family and community of social activists, did your passion for art set you apart?

Well, it was just a hobby at first. I was always doodling, and then for high school I went to an IB school, so I took higher level art classes, and it ended up being so much fun. I just had a natural talent for it. My art teacher was like, “I think you have a knack for this. I really see where you’re going.” It was nice to have that validation. I had an exhibition and my classmates were really positive about it. It felt really good. I was like, “I’m going to keep doing this.” But I actually stopped making art when I got to college. My parents did not want me to go to art school. They were like, “What are you going to do with an art degree?” My dad wanted me to go into politics and my mom wanted me to be a lawyer.

What did you end up studying?

My major is African-American studies and I’m minoring in English. I thought about Poli Sci for a second, but it felt like that was more of a degree that people jumped into because they didn’t know what they wanted to do. I chose AfAm because in high school, I didn’t know enough about my history. So I was like, “This is an opportunity to learn and pick up where I left off,” and where I should have had a really good understanding, but I didn’t, so it felt foundational to me.

And you actually stopped making art?

There wasn’t really any time before quarantine. There’s such a heavy course load. And between that, and being broke by myself across the country, I couldn’t really afford the materials that I needed. I would sketch things all the time, and before I got into oil paint, I would do Sharpie portraits for my classmates, but that was about it. I didn’t take it seriously until quarantine happened because then there was nothing else to do. Those first two, three weeks, I was so bored. I was like, “What am I doing? If I’m not working, I can’t just sit here. I need to come out of this with some kind of skill.” So I just picked up whatever brushes I had and was like, “I want to go all in and get as good as I possibly can.”‍

On your website, you say the purpose of your art is “to give young black women and young black men positive representation through my favorite mediums.” Talk about that.

Growing up in DC, a lot of my weekends were spent at the National Portrait Gallery and the National Gallery of Art, but every time I went, I never really saw any Back artists. I saw Black portraits, but it would usually be a depiction of a slave. My reaction was, “Dang, that’s not all that we did.” It’s just really damaging to not be able to see yourself anywhere. And I think obviously we’re making a turn with movies and music, and that’s fantastic, but fine art is one of those things that’s so important because we all take field trips to art museums and get really excited, really eager to look around and ask, “Oh, do I see myself in this?” So I wanted to fill that gap. That became super important to me. And with my degree, that background and understanding corresponds with my art.

Do you think your mission statement is connected to your family, in a way?

Yeah, for sure. My grandfather is very big on representation and being able to see yourself in higher places.‍

Your first big exposure as an artist came about because you felt Black people were missing in a place gaining a lot of attention, right?

Yeah, astrology was getting super big and everybody was like, “Oh my God, what’s your Zodiac sign?” I was like, “That’s cool and everything, but I don’t see anything that represents Black astrology. I’m going to make my own caricatures of what I think that would look like.” I started with the Gemini piece. I wanted her to have an Afro, Black-centric all the way, and she definitely had to have two faces, because Geminis have that dual personality, and that’s my moon sign, and I thought, “Oh, this is perfect.” So really, it just started as a thing for me to have a visual representation of my own chart. And then it blew up on Twitter, and I was like, “Okay. I guess I’ll finish the collection.”‍

That must have been wild, because up until that point, you had been making art in the quarantine vacuum.

Yeah. It was really random and really awesome. I felt, “Wow. People actually love my craft.” It was a huge encouragement to keep going. So I just kept experimenting, kept toiling with different aspects of oil painting. I don’t think I took the very traditional route with it. I’m entirely self-taught, I can’t focus long enough to even watch a YouTube tutorial. So a lot of it’s been experimentation. With acrylic, I wasn’t sure, like, “If I fuck up, will people still support this?” Acrylic doesn’t blend like oil does. It dries in five seconds, which leaves no time to fix it. But that’s okay, I don’t know -- something about seeing my mistakes and then watching myself come back from them is really satisfying to me. I embrace mistakes.

You also illustrated a children’s book!

That was so much fun. One of my old bosses put me in contact with her sorority sister, who was writing a children’s book for young Dominican girls in Queens. It’s called “The Music From Our Country.” It was so sudden, so random. All I could think was, “What an amazing opportunity.”

How do your parents feel now about you being an artist?

They’ve been super supportive. It’s a total 180 from where we were two or three years ago when they were like, “I don’t know if art is a real career.” Now it’s like, “If this is what you want to do, this is what you want to do. We’re going to help you in any way we can.” Of course, parents want you to be able to support yourself, but I feel like we’re that generation, we can’t just work a nine to five, or work just to work. We want to be fulfilled by it. And that’s what art is to me. The best way I can describe it is just peace. It’s just me and whatever YouTube video I have playing in the background, sometimes music, sometimes my dog barking at me. I don’t know. I just love it. Nothing else matters when I’m painting.

What’s next for you?

I have my own site where I sell my work and people can request commissions. I’m also experimenting with my style and with different materials. If I could do Renaissance portraiture, and put Black women there, that would be so insane to me. I feel like that’s what everybody has to study in art history. So if that’s where the narrative is, that’s where the narrative is. That’s hopefully what’s next if I can get my skill level to where I want it to be. I also don’t want to do portraits forever. I want to branch out and see how far I can actually go with this and how much I can really do. One of my goals for this year is to be featured in a gallery, big or small, I don’t know, but I want to have an exhibition. That’d be awesome, but if not, then I’ll just keep working until I get there.